This was the Foreword of The Levesque Cases as originally published:

“Pierre R. Levesque commenced his litigation in October 1987, seeking monetary damages and an apology for the 1984 broadcast by Time Warner Inc. cable television of a film that was a deliberate character assassination. In two years of intense court battles, all on the public record, he exposed a centrally-coordinated international criminal network, extending from the highest governmental offices in the United States and Canada to media conglomerates such as Time Warner Inc., intent on destroying economic enterprise and personal liberties.

The operating goal of the network at one level appeared to be the stopping of Pierre R. Levesque’s legal claims at whatever cost. At another level, another goal: the inside takeover of governmental and media power in Canada and the United States. Further evidence suggested that the network is worldwide.

“During the two-year battle, first in U.S. federal courts at Orlando, Atlanta and Trenton, and then in Ontario courts at Belleville, Toronto and Ottawa, the image of an international criminal organization solidified, in documentary evidence, court proceedings, illegal litigation tactics by corporate and governmental counsel, an illegal arrest and detention, fraudulent and coordinated rulings by courts and governmental agencies in both countries. All key institutions had been infiltrated.

“It may come as no real surprise that the US Central Intelligence Agency and Time Warner Inc. appear to be core organizations, coordinating the network in courts, governments and media of Canada and the United States. More surprising may the evidential conclusion that high governmental officials, such as the President of the United States, the Prime Minister of Canada, and the Attorney General for Ontario serve as willing executives of this clandestine network. The evidence suggests, moreover, that this international criminal network may look to a single identified individual for worldwide direction. The evidence converges on David Rockefeller, headquartered at Rockefeller Center, New York City, as that individual.“ 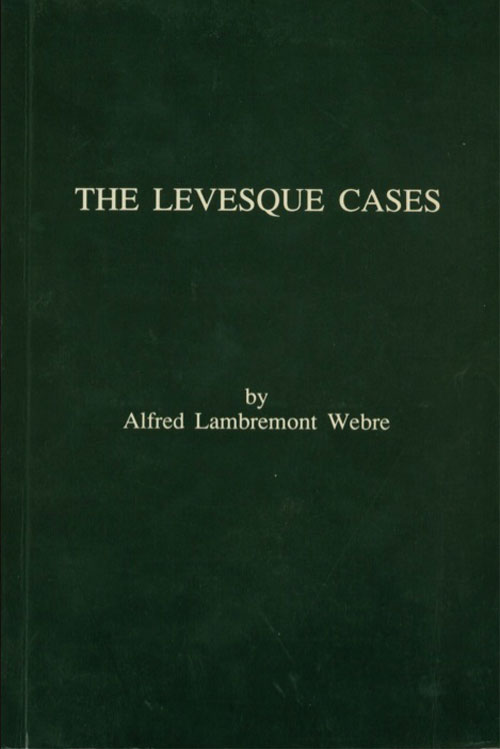 The Levesque Cases, a real life legal thriller, exposes the clandestine corruption of courts in the United States and Canada as attorney Alfred Lambremont Webre pursues legal vindication in a series of 26 cases against TIME-WARNER INC, David Rockefeller, then US President George HW Bush, Canadian Prime Minister Brian Mulroney, the Rothschilds, the secret Sanhedrin Anunnaki government, and the Government of Ontario and its Children’s Aid Society against whom Alfred would win a $750 million default judgment, one of the larger in recent Canadian legal history.

Alfred’s client in The Levesque Cases was Pierre Richard Levesque, a former Canadian Custom’s Officer, who in 1973 was abducted up into Interdimensional UFO Spacecraft in a mass abduction with about 150 other members of IAM, the Institute of Applied Metaphysics, a spiritual group based in rural Ontario that the media would mis-characterize as an “Ontario wilderness cult” led by Levesque.